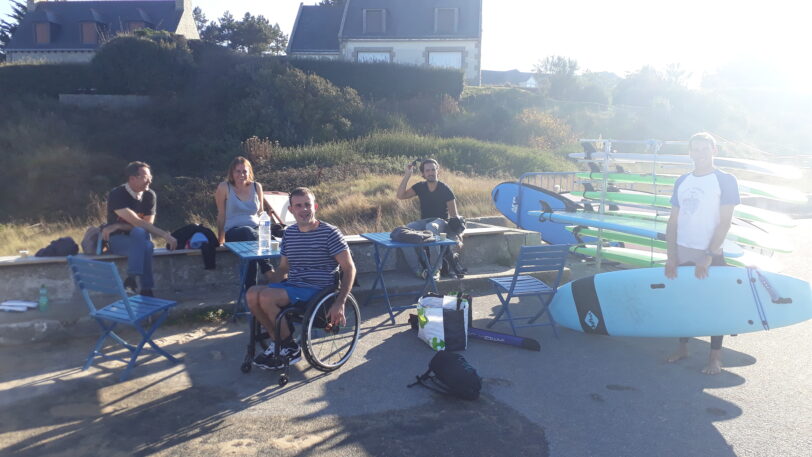 Could not see how quick passed the days

Two months until the end of the year

With the sun that still glitters

No sooner had we the time to express

That the cold has taken his place.

started with the reunion of the My Human Kit “crew”: Nicolas, Yohann, Hugues, Delphine, Guillaume, as well as a part of the board of the association, have started telling each other about the month of August. “How were holidays? Great! Did you move? Where? Oh, nice! Etc.”. And then they took up their old habits again.

– Human resources: two recruitments to be planned, a geek and a conductor. In other words, a technician and a manager or coordinator.

– Economic model: preparation of our charter with Cassandre from Entropia, who follows us within the framework of the support we receive from the foundation  la France s’engage. 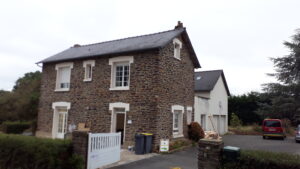 All trough the month of August, a handful of volunteers of the association LaboCesson worked to make a house accessible (broadening of doors, adapted toilets, etc.) in order to receive, among others, a public consisting of people with disabilities. This new fablab, located in the outskirts of Rennes, opens its door to everyone! It will provide more space in order to make progresses with projects as E-trotti (motorised wheelchair), Fl’Air (flying chair to practise paragliding) or OSV (Open Source Vehicle). By way of contribution, My Human Kit supports LaboCesson, financing it for what’s left in terms of work. 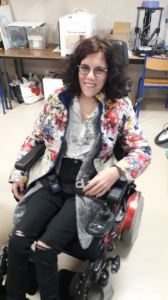 Girls, girls, girls! We want girls! Yes, we have to confess that, either it is a fablab, a humanlab, a marker space or a hackerspace, we find most of the time boys behind their walls, eyes stuck on their programming code or their soldering iron! The mission for Elisa, who will stay for 6 months: adding a woman’s touch to the association! Welcome Elisa!!

04th October. Annual general assembly
Presentation of 2017 results, the profit and loss account… But also hearing of volunteer who are involved with us, and with who we have not the time to talk during the Openlabs. Thank you for your involvement, it is thanks to all of you if we make progress with projects. 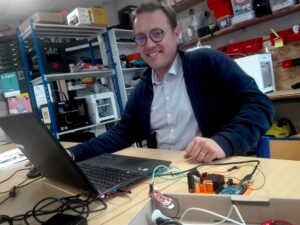 A recruitment certainly complicated, considering the number of competent people who are part of our network and the relationships created through time. But Julien, thanks to his knowledge in electronics, mechanical design, connected objects, Open source, etc., corresponds to the job. His missions: “boosting” the E-trotti, Fl’Air and Bionico projects. 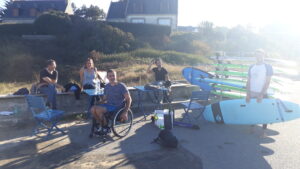 In order to be efficient, it is essential to get some fresh air and some distance. For an afternoon, a large part of the team made the most of the Indian summer at the beach of Longchamp (Saint-Lunaire) with Morgan, surf instructor at Surf Harmonie’s, who shared his passion with them. Even if the largest wave measured was 30-centimeters high, the sea has had, as always, a calming effect on us: it gave us this feeling of freedom. Thanks Tom for the video !

08th October. Simulation test of phantom limb with the ISIR, at the IRR of Nancy
SEE ARTICLE ON BIONICO’S BLOG 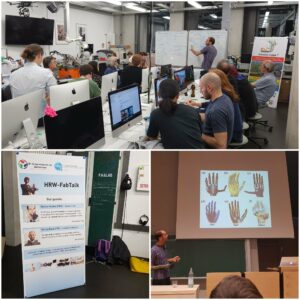 Nico travelled to the Kraftwerk‘s city, Dusseldorf, and more precisely to the fablabs of Botrop and Kamp Linfort, in order to introduce My Human Kit. He gave a motivating speech and some ideas of “assistive device” projects, aiming to mix new technologies, handicap, sharing and self-involvement. Two days spent in visits. Eventually, we wish we could create collaborative projects with them.

Our hosting training centre, Askoria, organized the second edition of the SEIS. Debates, film projections, conferences, meetings with the initiatives which make the ESS (Social and Solidarity Economy) a sector not necessarily profitable, but inevitably essential to the world in which we live! The Humanlab was open during the two days of fair, in addition to the stand in the centre entrance hall. Many of you were present, that was amazing! Moreover, the foundation la France s’engage, the one which supports us, was there: we welcomed its members with a soldering initiation.

13th October. Conference of Kinesitherapy: the era of the connected health 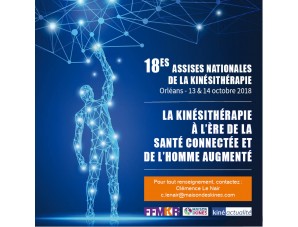 “We must assist our colleagues in this ineluctable digital transition will be without any doubt quicjer than we could think”, explains Daniel Paguessorhaye, president of the FFMKR in this article dealing with the 18th Conference of Kinesitherapy of Orléans. Bionico was there as a guest, in order to present the use of scanners and 3D printers in relation with the business of orthopaedic prosthesis. 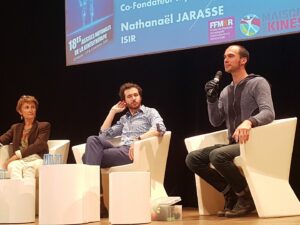 13th October. A Humanlab on the Mediterranean coast 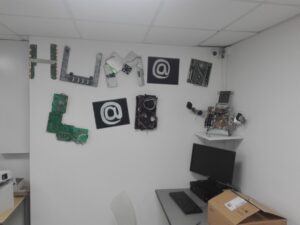 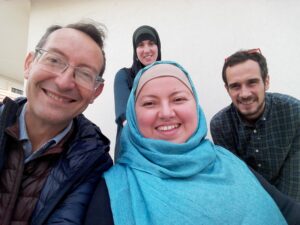 At the Saint-Pierre institute, located in Palavas-les-Flots, near to Montpellier, 3D printers will arrive soon! Hugues, Quentin and Arthur went there especially for the inauguration of a Humanlab. My Human Kit will indeed support the Saint-Pierre institute in its approach to become a place of sharing, digital manufacturing, collective intelligence and documentation to bring technical aids to people with disabilities. Let’s work with young people! 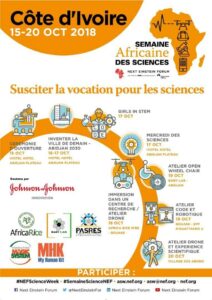 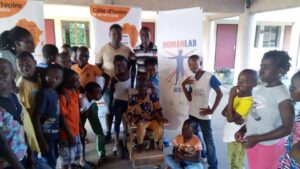 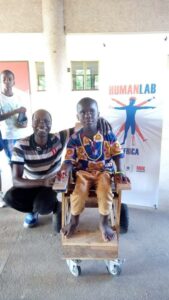 We are celebrating, during this Africa Science Week the first Humanlabs in Africa! For two years, the funds we have been collecting thanks to the solidarity running of the la Petite Lande secondary school, in Rezé are directly used for developing the Humanlab Africa project. No sooner had we the time to pass some material to build wooden wheelchair to a contact we have in Paris than these ones are presented during the Innovation Week. A part of funding enabled to buy plane tickets for flights across Africa. We are so pleased to see our logo near to the one of the foundation of the band Magic System! 1st Gaou yyeeaaaahhhhh!!! 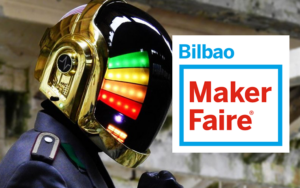 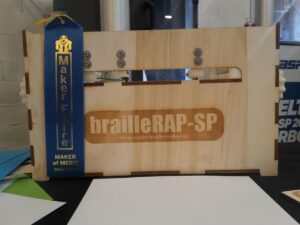 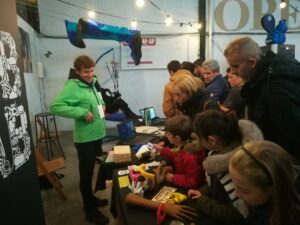 Delphine, John aka Nightly-builder, Stéphane and Philippe from Braille Rap SP hit the road to Spain on Thursday evening. During the 3 next days of festival, they presented the projects and links between digital manufacturing, disability, knowledge sharing and fun! The Matt’s flying chair team (chair for paragliding made from a kayak), from Bordeaux, joined them to present the Fl’Air project. Congratulations to the Braille Rap SP team, which even returned with the gratitude of the Marker Of Merit. 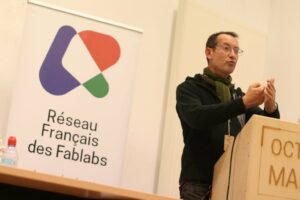 In the meantime, Hugues was in this beautiful region that is the Lorraine, where the national meeting of the French Fablab network took place for 3 days. In the name of My Human Kit, he presented there our projects about videogame accessibility, especially with the BASICA project. Then, as vice-president of the network, he launched an ambitious 3-year national program national dealing with disability.

– and obviously the Thursday Openlabs, as always!

Anyhow, as granny would say: “the most important is to get busy!”